With the recent arson attack on a school in the north west it has drawn attention to the fact so many of our schools remain vulnerable to similar attacks. Ultrasafe have installed school fire sprinklers and fires suppression systems in 5 schools including boarding accommodation.

The need for school fire sprinklers has been recognised for many years. The Chief Fire Officers Association produce Guidance on the Provision of Fire Sprinklers in Schools which you can take a look at here:

Guidance on the Provision of Fire Sprinklers in Schools

In the document the president of the association makes the following comment:

The Chief Fire Officers Association (CFOA) has for many years campaigned for the inclusion of sprinklers in schools. I believe the case for sprinklers is stronger now than at any time. It is a worrying fact that schools are still experiencing fires at an alarming rate. Year on year, when the statistics are published for major fires, educational establishments are always at the top of the list. It is also a concern that an increasing number of school fires, in some areas over half, are occurring when the schools are occupied. In this document the President of the Chief Fire Officers Association says

As fire officers we know that the true cost of arson in schools goes far beyond the huge financial losses incurred. Think of the disruption to teachers and students, no matter how valiant their efforts at recovery, an arson attack on a school will inevitably affect educational prospects. The devastating effect on local communities is also a major concern, particularly now that school buildings are being utilised for a whole range of activities.

Hopefully all new schools of the future will integrate school fire sprinklers and fire suppression systems into their infrastructure. 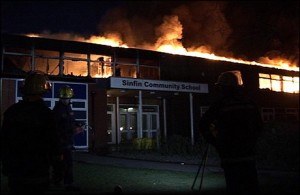