March 2017 has seen a number of sprinkler saves throughout the UK that have highlighted the value of fire sprinklers. Below I have summarised some of these incidents and also the comments of the fire crews that attended. It is not that March has been exceptional, and this is not an exhaustive list, it is just a snap shot of examples to illustrate how fire sprinklers really do save lives, protect property and safeguard investments. 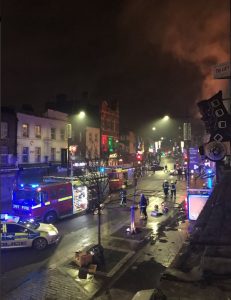 28 February 2017 – A fire, believed to be caused by an electrical fault in Camden’s Stables Market, was controlled by the indoor market’s sprinkler system until the fire brigade arrived. In the early hours of 1 March 2017 Fire crews were able to control and confine the fire to the ground floor unit.

A London Fire Brigade spokesperson said: “This incident highlights the clear benefits of sprinklers to businesses and we would urge all companies and business owners to install them. Read more

16 March 2017 – A sprinkler system prevented a serious fire at an industrial recycling warehouse in Kensal Green. Around 15 workers evacuated and an industrial shredder containing construction waste was completely gutted in the blaze,

A spokesman for London Fire Brigade said: “As well as being potentially life saving devices, sprinklers help with business continuity by minimising disruption and allowing businesses to get back to normal as soon as possible.”  Read more

Domestic Fire in Retirement Complex in Stoke on Trent

16 March 2017 – An fire broke out in the early morning in a flat within Oak Priory retirement complex, in Holdcroft Road, Abbey Hulton near Stoke on Trent. Firefighters from Staffordshire Fire and Rescue Service praised a state-of-the-art sprinkler system which helped to suppress a blaze.

Fire Engineer Stuart Ruckledge explained such systems can save lives when emergencies occur but they also have the added benefit of ensuring minimal damage is caused to belongings and buildings. He went on to say ‘Importantly, these systems also increase the safety of our firefighters’. Read more.

Fire at a Plastic Factory in Chippeham

16 March 2017 – A sprinkler system installed at a building owned by Chippenham’s plastics manufacture Wavin was instrumental in saving the structure from being destroyed after a fire broke out. The sprinkler system managed to control the blaze and stop it from spreading and doing serious damage while fire crews were on route.

Head of fire safety at Dorset and Wiltshire Fire and Rescue Service, Seth Why said: “Automatic sprinkler systems in both commercial and residential properties are one of, if not the best way to suppress a fire at the earliest opportunity, giving us valuable time to attend the scene and extinguish the fire. Read more

22 March 2017 – Fire broke out in a fabrication factory in Birtley, Gateshead. Fire was caused by a motor overheating in a shot blasting booth, but the sprinkler system was activated and it was confined to the immediate area.

Assistant Chief Officer John Baines of Tyne and Wear Fire and Rescue Service, said: “There is no doubt that having an automatic sprinkler system in this building stopped the fire from spreading and prevented potentially severe damage to the rest of the property and the business itself. “I would encourage all businesses to install sprinklers to protect their premises and staff, the general public and firefighters.”

A spokesperson for the business, which did not want to be named, said: “The sprinklers have saved us a fortune. Read more

Ultrasafe design, install, commission and service domestic and residential fire sprinkler systems throughout England and Wales from offices in Cheshire, East Sussex, Lancashire and Wales. Please do not hesitate to contact us for further information.