This 188 year old building was originally known as Gensing Lodge and formed the central part of the building, The Augustine Sisters of the Holy Heart of Mary purchased the building and opened as a care home for elderly ladies who had no family in December 1886, it was extended in 1900 and a chapel added in 1913. In 1928 a nursing home was opened and an operating theatre added. The building was extended again in 1936. At the start of the second world war it was transformed into a maternity unit before being requisitioned by the army and subsequently bombed in 1943. In 1945 the building was returned to the Sisters and remained a nursing home until 1984 when the building was put up for sale. It became a hospice in 1987. A popular local charity which was unfortunate to suffer an arson attack in July 2015.

This resulted in the hospice closing this site and relocating both patients and staff. The staff returned to work in the upper floors which were not damaged during the fire. The Ground and 1st floor then underwent a refurbishment project over 9 months by WFC contractors. Part of the refurbishment included a fire sprinkler system. 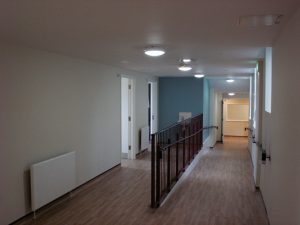 Ultrasafe were contacted by the client directly to provide a system not only to the refurbished areas but to all parts of the building. This system consists of 350+ heads over 6 floors fed by a pump and tank located in the basement. Due to the vulnerability of the patients it is not always possible to evacuate all persons from the building and it was decided that the sprinkler system should have an ‘Uninterrupted power supply’ (UPS) so the sprinkler system will work even without mains power, offering a further level of assured protection. 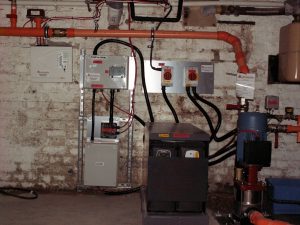