Congratulations and many thanks to everyone who participated and joined in the fun at the Keith Morris Golf and Family Fun Day memorial cup on Friday 23rd August 2013.

Remarkably, the day was sandwiched between two wet and dull days of weather but the sun was shining and Sedlescombe Golf Course was ready for 62 golfers on a Stapleford four style 18 hole game. The Best Overall Individual Score was awarded to Mr Richard Kent with 38 on his score card! The bespoke designed sprinkler head glass trophy,The Ultrasafe Cup, was very proudly received by Mr Kent and his wife Janet by Victoria Bardrick this morning at the Ultrasafe offices in Battle. 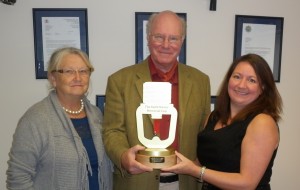 Awards for Best Team Score, Longest Drive, Nearest the Pin and “wrong type of Tea” for the lowest scoring team, was Mr Morris’s twin sons Matthew and Keith joined by Paul Matthews and Phil Ibrahim who in true British spirit were happy to accept their IPS mugs!

The fun day started at 3pm with live music supplied by “Titus” who got the crowd going with a foot tapping variety of folk and shanties, the barbeque was well served by the staff of Greens Restaurant and managed by Sam Linklater, who is also responsible for a fabulous photos. Face painting, sports equipment from Claremont Prep School, a visit from a fire appliance and a puting competition organised by Nick and Dan Gale brought additional funds to the charity. 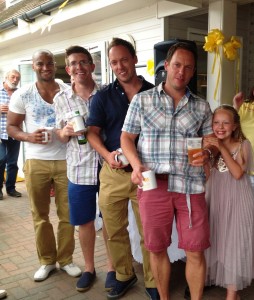 After the awards came “No Exit” another live band who polished off the night with many dancing feet and raptures of applause leaving a great lasting memory of the day – with comments from the guests such as “we’ve had an amazing night and Keith would have loved the day!”.  Over 200 people attended the event and James Beeching of St Michael’s Hospice Hastings helped present the awards and thanked all who attended and helped raise just under, a staggering £8,500 for the Keith Morris fund.

The event was organised and run by Victoria Bardrick the customer services and sales manager at Ultrasafe who took to the challenge like a duck to water, “it was a truly brilliant day and I loved every minute of it, Keith was with us on the day beating off the bad weather and in keeping with his bank holiday tradition, a superb party atmosphere was enjoyed through out the day. Keith would have been very proud of his family, especially his grandaughter, Jessica-Lily who did a splendid job as our Trophy girl”.

Ultrasafe wish to thank ALL the sponsors, local businesses and people from in and around Brede, Broad Oak, Battle, St Leonards, Sedlescombe and Hastings. Very generously received and we hope to present the cheque at the end of September to the Hospice. Photos of the day can be seen on our facebook link; UltrasafeFireSuppression.!